Liesbeth de Block taught first at Centerprise, then in the 'Spice Isle' which is twinned with Hackney:

'Many of the students who came to the Reading Centre had been taught to read at schools by naming the letters. This wasn’t phonics but naming. So to read the word ‘road’ you would be taught to say, by name, the letters R.O.A.D = ‘road’. It was long and laborious and illogical, cutting out both sound and meaning. We focused on meaning and prioritised using the students own language, writing down what they said for them to read so that both the content, structure and vocabulary was familiar. When I went to Grenada I met another debate which was much more around language and power. People there speak Grenadian English, a form of creole, if you like. This has some different vocabulary influenced by African languages and French as well as its own vocabulary. (For example a strong white bucket that was widely used is called a 'Toyota' because it’s strong like the Toyota car.) More importantly it has different grammatical structures. So in literacy teaching there were two priorities. Firstly to validate and recognise reading, writing and performance in Grenadian but also to offer skills in Standard English as the language of international power both culturally and politically. So the materials and teaching practice that were developed both for adult literacy learners and school students were based on both teaching English as a second language and local content. At Centerprise I had agreed that the priority was to start from the language of the students who came to us to boost confidence, validate their experience etc. but I think we did not have an effective strategy for including standard English which is what many of the students also wanted, recognising it as the language of power. In Grenada I came to appreciate the need to have access to different languages and the ability to express yourself in different forms and for different purposes. It was so sad that the first children’s reading books we developed had not yet even got into the schools at the time the USA invaded in 1983.' 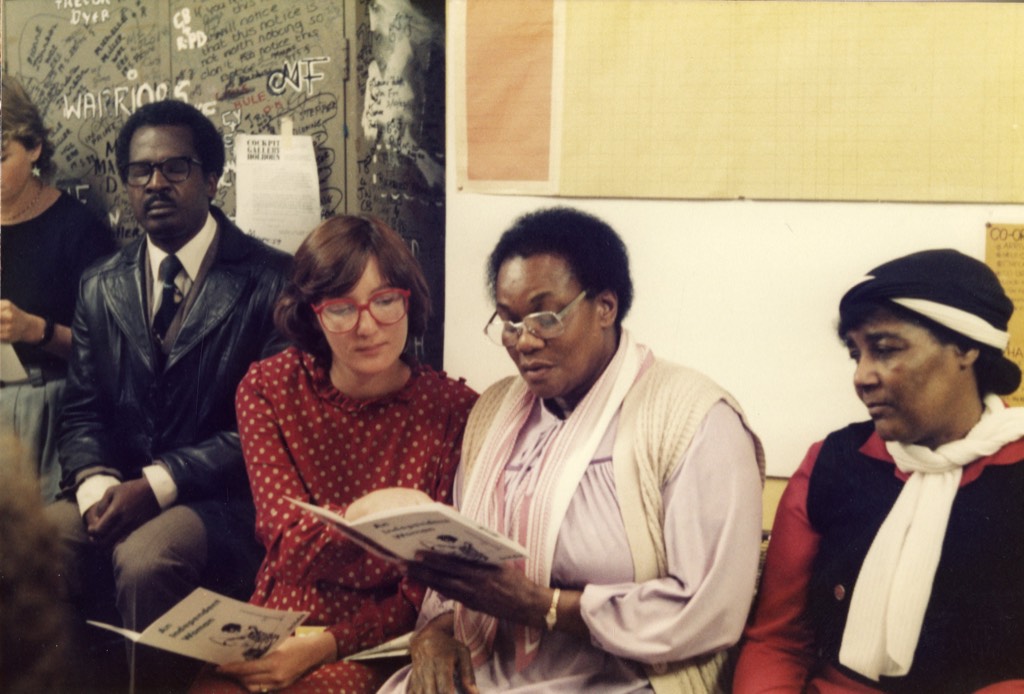 A Reading Centre book launch party at Centerprise, 1983, Photograph courtesy of Maggie Hewitt.
10 / Every Birth It Comes Different: The Mothers' Hospital
12 / The Cat at the Window: Gayhurst School
Menu