'The child in the photograph
Pigtails and one sock wrinkled down
The family lines up in well rehearsed positions
The garden is neat, its walls are high
'Come and have your photograph taken'
And always the obliging smile
When in all that cosiness, did I learn anger
When did I start saying 'no'
Realise that my father was not always right
Some questions cannot be answered
That a family is not the world
And the world is not a family
And a family is not enough?
The garden wall has crumbled
There's a chaos of a world out there
There is a war inside my head
And I am learning not to smile into the camera.'

Maggie reflects: 'As a former English teacher I had encouraged others to write but had done little myself. When I came to Centerprise and joined the Hackney Writers' group I realised that I couldn’t just comment on the work of others, I had to write myself. It was scary at first. I felt very exposed but we were there more to encourage than critique. We were also doing poetry readings – in the coffee bar, local pubs and with other writers' groups across the country. I discovered that I enjoyed poetry performances whether reading my own or other people’s work.

In ‘Smile Please’, my parents wanted to create a perfect happy family after they had lived through two World Wars. In the 1950s, children were brought up to be obedient and not ask questions. But as I grew up, I wanted more.

The photo was taken in our garden, all of us wearing our identical Christmas brooches, dresses made by my mother, like all our clothes. It‘s the early 1950s. For my parents, who had just lived through two World Wars and left school at 14, the home and our education was everything to them. Saturday morning pictures was not allowed as it was common; no fish and chips because my mother cooked all our meals. When I got a place to go to university, I announced that I would only wear black underwear, my mother despaired.

I owe them a lot, for giving me chances they never had. I wouldn’t write such an angry poem now. However, it was after I left home that my political education began and this has influenced so much that I have done since then.' 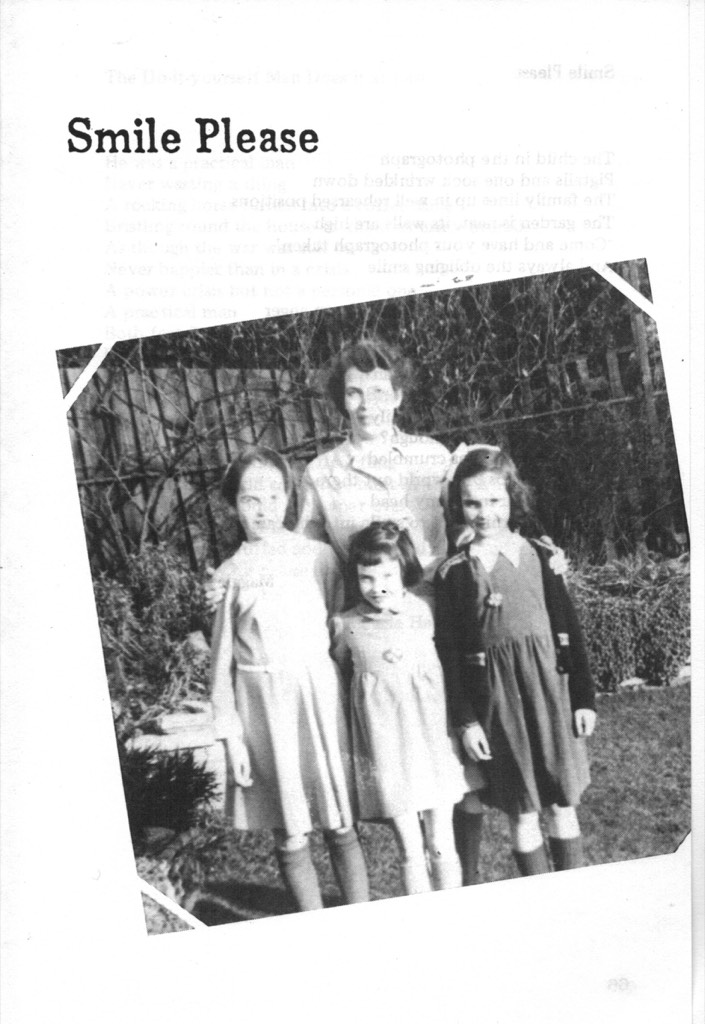