'In the spring of 1979 a council tenant came to the Advice Centre at Centerprise for help in getting the council to deal with dampness in her home. On the face of it this was routine work and, as usual, I arranged a visit to see how bad it was. In fact, the circumstances were far from routine and this one case led to a fundamental refurbishment of at least three newly-built estates. The Smalley Road Estate Campaign revealed serious inadequacies in the way that the council designed, built and managed its housing and eventually contributed to significant changes in senior management and political leadership at the council.

I was astonished when I visited Smalley Road for the first time. I was already used to the worst of the council’s housing stock; its pre-war walk up blocks and its post-war systems-built deck access estates. Here was something new - brick built terraces with small gardens - the sort of housing that poorly housed people across Hackney aspired to have. However, the house I had come to see was damp inside, with geometric lines of black mould above all the windows. I described the legal options to the tenant but she was hesitant about initiating action at the Magistrates Court. However, as the weeks unfolded and other tenants joined the campaign, she gained the confidence to take legal action and she remained a key activist throughout.

Perplexed by seeing extensive dampness in such a new property, I wanted to know if other properties were affected in a similar way. I knocked on some neighbouring doors on the estate. People were happy to let me in when I explained that I was from Centerprise and that I wanted to help. I found several properties had a similar pattern of dampness. Many tenants were ashamed of the black mould, seeing it as dirty. Some of them wiped the walls with bleach every day to keep the mould at bay. They had all complained to the council and had all been told that the dampness was a result of their lifestyle. They were told to open windows and stop drying clothes indoors.

At the end of the terrace I came to a house occupied by a seriously ill woman with two small children. She was having kidney dialysis every other day and was simply too unwell to clean the mould away. The inside of the entire gable end wall of her house was covered with thick black mould and the smell was foul. She told me that the hospital wanted her to be moved but the council had refused to transfer her because she had rent arrears. I was sure that there would be widespread disgust at the conditions this family had to endure. I was desperately keen to ensure that they were moved out quickly but I also wanted to ensure that the local press had the opportunity to document the case, to give the campaign momentum. The harrowing circumstances of this family, who were unable to participate in campaigning activities, created an overwhelming sense of urgency for me. I wanted to get the campaign moving quickly.

Back at Centerprise I talked it all through with our part time Advice Centre worker, Lois, and she dug out a few files of similar cases involving another new estate, elsewhere in the Borough. The Advice Centre had succeeded in helping tenants to transfer from these properties and Lois said that she thought that the properties were now boarded up.

The campaign we initiated was based on collective action by the tenants to seek legal redress. Having leafleted the estate to tell them what we were doing, Hackney Citizens Rights Group volunteers and some of my old Environmental Health Officer colleagues met at Smalley Road one weekend. We surveyed the residents who answered the door to us and carried out inspections of all the properties where we were invited in. We gave the tenants who wanted it an inspection report from an independent expert. A week or so afterwards around 20 tenants met me at the Magistrates Court to initiate legal action. In addition, the end of terrace property was declared unfit for human habitation by a Centerprise coffee bar regular who had recently become a magistrate. I remember that he wanted to talk to the Environmental Health Officer in person before signing the order that I had prepared and the three of us sat together in the coffee bar while he made his decision.

We supported the campaign with a series of packed public meetings at which residents asked senior council officers and councillors about the conditions on the estate. These meetings led to the development of a tenants’ association which negotiated with the council over how the subsequent remedial works were managed and the tenants treated. Throughout the campaign, council officers tried to persuade the tenants that they should listen to them, the men in suits and not to the 25-year-old woman in dungarees from Centerprise. When I invited the council’s tenant liaison officer to a meeting with the Smalley Road tenants so that they could benefit from linking up with other tenants in the Hackney Federation of Tenants and Resident Associations, the council officer tried to have me thrown out of the meeting.

The campaign generated a great deal of publicity, local and national. The initial survey result, ‘One in Three Homes on New Estate Damp’ created our first front page headline in the 'Hackney Gazette' but there were many others. Every public meeting, council report and legal development generated headlines for the campaign. David Hencke at 'The Guardian' produced three pieces which tracked the progress of the campaign, on my advice. I also wrote to the London Programme and they devoted a whole TV programme to Smalley Road. A local architectural writer picked up the story from 'The Guardian'. He covered the story extensively in the Architects Journal over a number of issues and became heavily involved in the campaign, providing the commentary for the London Programme, for instance.

The campaign was assisted by the leaking of two damning confidential reports about Smalley Road, one internal and one commissioned by the council from an independent consultancy. The reports arrived at Centerprise, addressed to me, in plain brown envelopes. I made no attempt to find out who sent them but there were a couple of obvious candidates. I passed both reports to the 'Hackney Gazette' and to 'The Guardian'. The reports were highly critical of the design and the construction of the estate and were scathing about the way in which tenants’ complaints had been treated. They pointed to similar problems in other recently built estates, confirming what we had known from the beginning, that the issue was much greater than Smalley Road, affecting up to 2000 properties in the Borough. The estimated cost of remedial works just to the Smalley Road Estate’s 277 homes was put at £2 million, which was equivalent to the initial build cost.

Handling the confidential reports was a source of tension in the Centerprise Monday morning meeting. My colleagues had been supportive of the campaign throughout, with the proviso that it should be tenant-led and should not give me, the Centerprise worker, a high public profile. We were, however, all concerned about the potential impact of such a provocative campaign against a major funding body and, for some members of the collective, handling the confidential reports was a step too far. I remember the journalist from the 'Hackney Gazette' hammering on the door to collect the report I had promised him while, at the same time, the meeting debated the wisdom of handing it over. Interestingly, nearly 40 years later, I remember the argument but not how it was resolved.

The Smalley Road Estate scandal was a financial and reputational disaster for the council. In its aftermath, there were a number of changes in its senior management, including its Chief Architect. There was also a complete overhaul in its political leadership, with senior roles (Leader and Committee Chairs), transferring from the Labour Party’s old guard to a younger and more radical group of Labour Party politicians. Former Centerprise worker Anthony Kendall became the Leader of the council.' 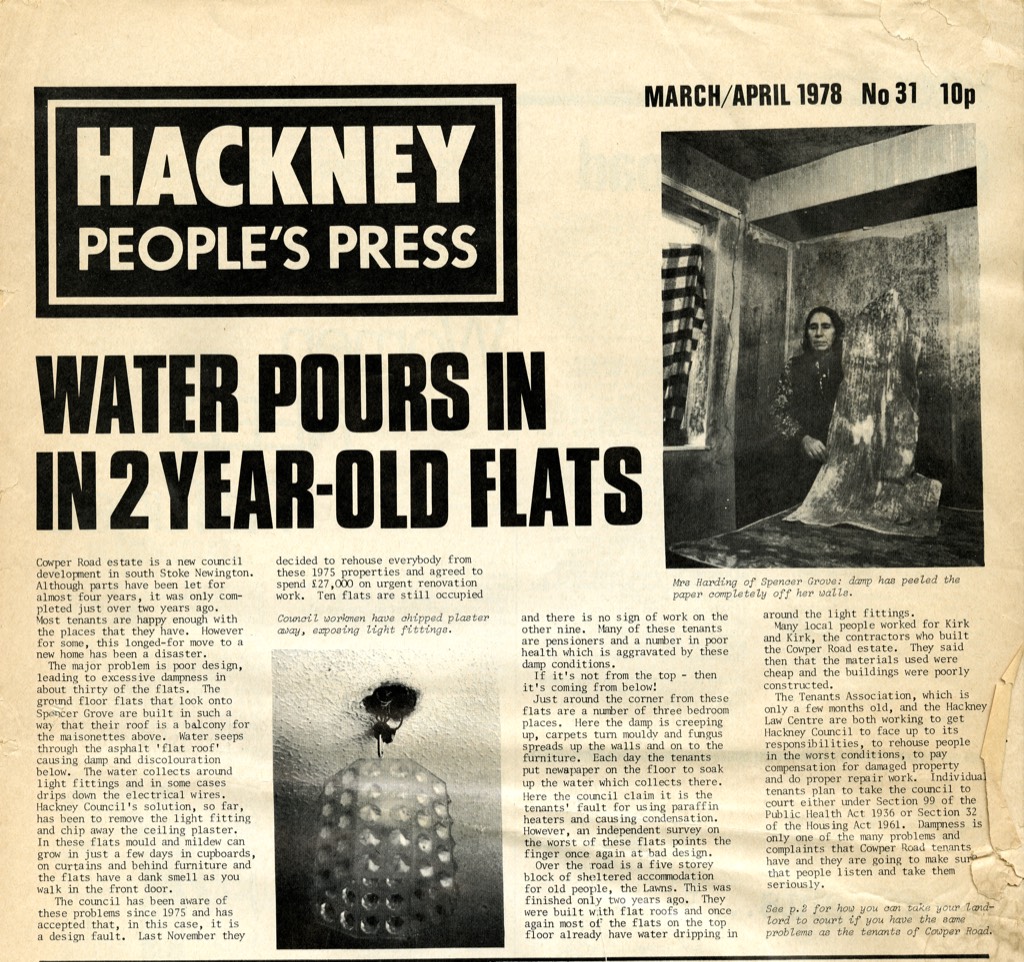